Description: The Route 66-related holdings of the New Mexico State Library are divided between the library’s Southwest Collection and its State Documents Collection. The former contains extensive vertical files consisting of newspaper, magazine, and newsletter articles, as well as flyers, brochures, postcards, tour guides, maps, and other printed and pictorial ephemera issued by state and municipal agencies, chambers of commerce, and other civic and private organizations over the last 25 years. The themes and topics covered include commemorative activities, festivals, tourism, historic and architectural preservation issues, and the folklore of the road. The Southwest Collection also maintains a broad range of popular and scholarly literature on the highway, as well significant holdings of technical and economic reports, studies, and surveys commissioned and conducted by various state and/or federal agencies.

The State Documents Collection houses a complete run of New Mexico Magazine and its predecessor, New Mexico Highway Journal, which began publication in 1923. The magazine constitutes a principal source of information for numerous aspects of the history and development of Route 66 in New Mexico, including planning and construction, administration, maintenance and federal aid, legislation, markers and signs, patrol and safety, and tourism and travel. Articles on these and other subjects were frequently accompanied by photographs and maps, and often include a wealth of statistical information. Another key Route 66-related holding is a partial set of the annual State Highway Engineer’s reports, dating back to 1912. Finally, there are numerous publications, reports, and newsletters of other state agencies and department with programs that involve Route 66-related development and promotional activities. 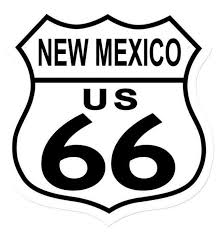